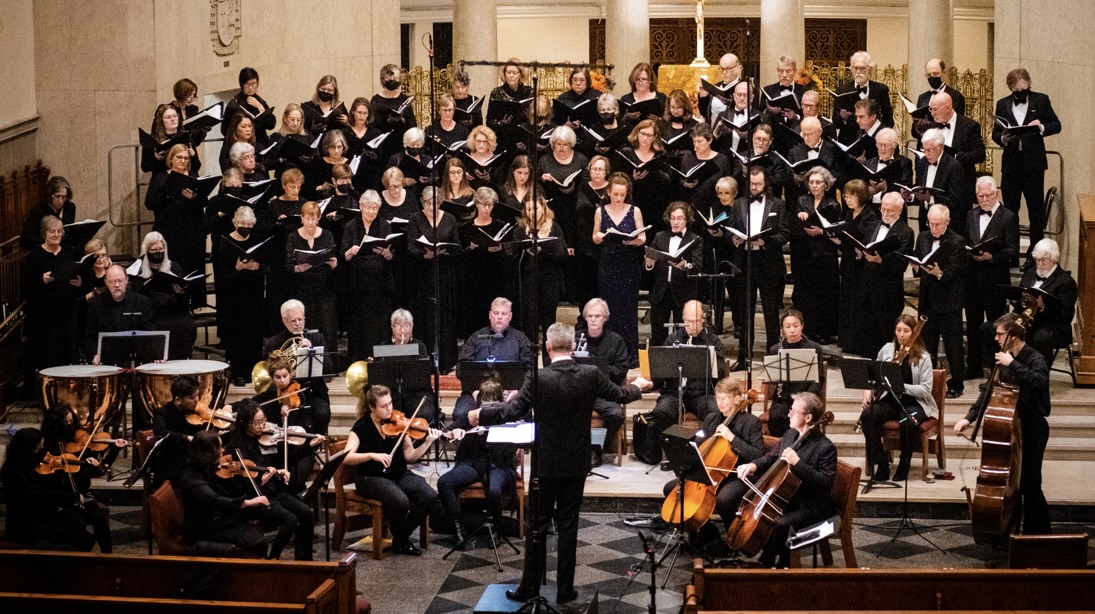 Commonwealth Chorale is a welcoming and inclusive auditioned chorus that attracts experienced singers from the metropolitan Boston area. Led by Artistic Director Dr. Michael Driscoll, Commonwealth Chorale is committed to performing the finest classical music from all periods and from a wide cross-section of composers. Past performances have included Amy Beach's Grand Mass in E-flat Major, Handel's Israel in Egypt, Haydn's The Creation, Vaughan Williams's Sea Symphony, Rachmaninoff's All-Night Vigil, Bloch's Sacred Service, Poulenc's Mass in G, and Requiem settings by Mozart, Brahms, Verdi, Fauré, and Duruflé. The Chorale has collaborated with the Metropolitan Chorale plus a number of orchestras including the Boston Pops, Boston Philharmonic, Boston Civic Symphony Orchestra, Concord Orchestra, the New Philharmonia, and the Newton Symphony Orchestra.

The close of our 2021 - 2022 season also ended an era, as we wished a very fond farewell to our music director of 43 years, David Carrier. After his long tenure, we are delighted that David will remain affiliated with us.

David guided us through the very early years when, as the Newton Choral Society, all we could afford were concerts with piano or organ accompaniment. From those humble beginnings, and with David’s always growing vision for what we could be as singers, we grew and matured. Maturation was reflected in the music we performed and in our ability to raise the funds needed for hiring professional musicians to perform with us and to perform in venues that early-on were only a fantasy. As the scope of our programming grew so did the quality of our performances. Increasingly our membership was from well beyond Newton, reflecting our reputation as one of the best amateur choral groups in the greater Boston area. Ultimately we changed our name to Commonwealth Chorale.

Without David’s guidance, vision, musical talent, teaching skills, patience, and perseverance, Commonwealth Chorale would not be the group it is today. David’s work created the excellent musical foundation on which we continue to build. Thank you, David!